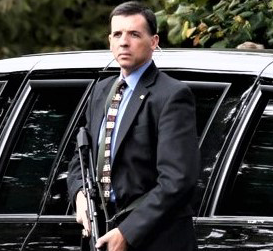 Scott Bradshaw is a 20+ year veteran of federal law enforcement, having worked for both the Federal Bureau of Investigation (FBI) and the United States Secret Service (USSS).

He is currently serving as the Director of Protective Services with Centurion Defense Solutions LLC. While with the FBI, Scott served as a member of the task force which investigated the World Trade Center bombing in 1993, as well as the task force which investigated the bombing of the Alfred P. Murrah Federal Building in Oklahoma City, OK, in 1995.

The last twenty years of his career, Scott was a Special Agent with the United States Secret Service where he protected numerous world leaders to include spending four and half years on the detail of the President of the United States. Scott has conducted numerous security planning advances both foreign and domestic.

Additionally, Scott did a temporary assignment as a member of the USSS’s National Threat Assessment Center (NTAC) focusing on the NTAC’s Safe School Initiative. Scott has conducted numerous federal criminal investigations in such crimes as threats against the President, counterfeiting, credit card fraud, wire fraud and identity theft.